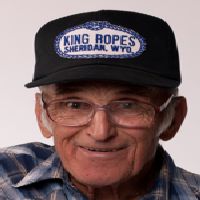 William “Bill” Roswadovski, 82, of Sheridan, passed away peacefully after a short illness at his home surrounded by his family on Saturday, September 12, 2015. He was born at the family home on Early Creek near Ranchester, WY on June 30, 1933 to Stanley and Emilia Mildred (Mates) Roswadovski.Bill enlisted in the US Army in June of 1953. He served during the Korean Conflict and was stationed in Germany. After discharge from the Army, he met Darlene Sobotka at Eaton\'s Ranch. They were married on July 23, 1955, Darlene\'s 17th birthday. Darlene and Bill celebrated 55 years of marriage together. Darlene passed away on January 30, 2010.Bill worked for Montana-Dakota Utilities for fifty years. After retiring, Bill helped his neighbors on Big Goose, haying during the summer and plowing snow during the winter. He was always ready to lend a helping hand to anyone whenever he could. In his earlier years he was an avid hunter and fisherman. You could always see Bill and Darlene accompanied by their two dogs driving the back roads looking for wildlife.Bill was preceded in death by his parents, his wife, Darlene, and sisters, Josephine Paulus and Albina Schwabauer. He is survived by his three children, Cher Marble (Alan) of Tucson, AZ, Robert of Gillette, WY, and Debra Pasco (Dan) of Sheridan, WY, his sisters, Mary Legerski and Nancy Williams, eight grandchildren, Justin (Khristina) Roswadovski, Jessie Roswadovski, Anney (Jake) Jasinski, Rylan (Brittany) Marble, Josh (Amy) Porter, Michael (Mandy) Porter, Casey Pasco and Sam Pasco, several great-grandchildren and nieces and nephews.At Bill\'s request there are no funeral services planned. In lieu of flowers, donations can be made to the Sheridan Dog and Cat Shelter at 84 East Ridge Road, Sheridan, WY 82801 or to the American Cancer Society at 333 S. Beach, Casper, WY 82601.Kane Funeral Home has been entrusted with arrangements.