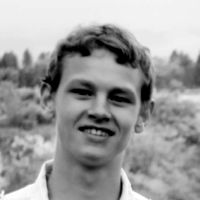 View Service Folder|Click for Video Tribute On August 7, 2015, we lost our beautiful son and brother, Wyatt Reed.Wyatt was born October, 9, 1997. He grew up in Sheridan and attended Sheridan schools. Wyatt had so many talents. He loved to build things. He spent several summers working on his tree house, even designing a draw bridge to the highest level. This sanctuary he shared with his little brother where they would share soda and snacks. He also helped his dad rebuild the bridge over the creek running behind his home. Long hours did not discourage Wyatt. He loved the hard work. He had incredible artistic ability. He would sit and draw for hours. We all remember his lovely pictures taped to our refrigerators.Wyatt was a superior athlete. Whether riding his BMX bike, snow boarding or roller blading, his quickness and dexterity were easy to see. His little brother still remembers Wyatt running up the trunk of a tree and doing a back flip and landing on his feet. We still see him in our mind\'s eyes riding his dirtbike or BMX bike and jumping the dirt mounds behind his home.Wyatt was an enthusiastic fisherman. We would watch him with his fishing pole, jump on his bike and head for a pond or creek to try his luck. He especially loved camping with his families and fishing on the mountains and being in the outdoors.He also had a huge love for music. Music soothed Wyatt and he could sit and listen to his iPod for hours, helping him to go to sleep or get through his school days.Wyatt was a compassionate boy! He had a huge spot in his heart for his four legged family and even spent some time helping at the local animal shelter. He loved his family, especially his three brothers. Oh, how they liked to wrestle, play video games, camp, fish, ride their dirtbikes, and spend time in the tree house. Wyatt was not embarrassed to give hugs or say, “I love you.” People just had to reciprocate, entranced by his mischievous smile that somehow emphasized his sincerity.Wyatt truly was a beautiful person, inside and out. When he got his driver\'s license, he chose to be an organ donor, and his last selfless gift to others was to affirm life in this way. He lives on.Wyatt is survived by his parents, Laura Lunt-Koltiska and Travis and Veronica Reed; his brothers Cody, Ryan and Landon; his grandparents Randy (Linda) Reed, Ann Reed, Lela Chapman, Dixon (MaryBeth) Lunt, and George and Esther Mathews; Great Grandmother Mae Dean Reed; Aunts Annette Little, Carey (Audrey) Lunt, Carrie (Chris) Mutter, and Vicki Popiel; Cousins, Amber Cathy, Brandon Farstveet, Abbi Little, Greyson Gilliam, Brayden Dawson, Stephen Popiel, and Thomas Popiel; and multiple great aunts and uncles and great-great aunts and uncles.He is preceded in death by his great grandparents, Leonard Reed, Alan and Marlis Peterson, Richard and Iris Lunt, Paul and LaRena Collingwood, and Madaliene Mathews.Services for Wyatt will be at 2:00 pm, Friday, August 14, 2015, at Grace Anglican Church (Old Country Club Grounds), 1992 W. 5th Street, Sheridan, WY, with Reverend Kevin Jones officiating. Two gatherings of family and friends will immediately follow the service. Please pick either location for memories and fellowship: The Reed home at 2029 Holmes Avenue, Sheridan, WY, or the Laura Lunt-Koltiska home at 1606 Taylor Avenue, Sheridan, WY.In lieu of flowers, donations can be made to The Wyatt Reed Memorial Fund at First Interstate Bank, attention: Shannen Carroll, 4 S. Main Street, Sheridan, WY 82801 to place a park bench in Wyatt\'s honor or the Sheridan Dog and Cat Shelter, 84 East Ridge Road, Sheridan, WY 82801.Kane Funeral Home has been entrusted with arrangements.