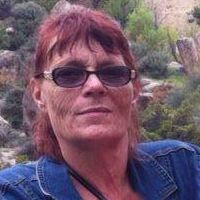 Dawn Elaine Busche, 56, of Sheridan Wyoming, passed away at home on July 31st, 2018.Dawn was born October 17th, 1961 to John “Jack” and Marjorie Smith. Because of her father’s career in the Navy, Dawn lived in California, Tennessee, Virginia, Rhode Island, and several other places. In 1976, they returned to North Dakota where she lived in Jamestown with her parents and younger sister, Bobbi.   Dawn was blessed with an imagination that was fueled by the beautiful places she lived in and traveled to with her family. Her imagination inspired her to start writing, and never stop. Dawn received her early education from several schools while moving, and earned her GED in 1980. It was not long after that she met a handsome farm boy with blue eyes and a great smile.  Despite the fact an eager-to-arrive calf almost stole away the groom; Greg and Dawn were joyfully married on March, 28st, 1981.  They made their home in Marion, Fort Ransom and Lisbon, respectively, in North Dakota.Dawn had an enormous heart.  Her greatest loves in life were her family, her animals, and the worlds she wrote into existence. She poured this creativity, good-heartedness and of course, love of all animals into her three children, Amanda, Katrina, and Lucas. Throughout their time in North Dakota, Dawn and Greg fostered many kids whose lives were touched by a woman who always had a place at her table for them.In 2005, Dawn and Greg moved to Sheridan, Wyoming, where they continued to open their hearts and their home to anyone who needed help. Even as her health declined, Dawn never lost sight of her faith in her savior, Jesus Christ. Dawn is survived by her husband, Greg. Her children Amanda (Chris) Tolls, Katrina (James) Shoultz, Lucas (Trista) Busche. Her grandchildren, Jacob, Wyatt, and Hunter Shoultz, and Aurore Busche. Her mother, Marjorie, sister Bobbi (Matthew) Brugger. Her nephew Jackson Brugger and niece Hannah Brugger, as well as the many children she chose to welcome into her heart. She was greeted in paradise by her father, Jack and infant son Davey.  A Celebration Of Life, will be held Monday, August 6, 2018 at 2:00 PM at the Cornerstone Church, with Pastor Tony Forman officiating.