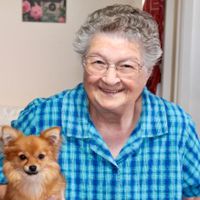 Elizabeth “Jean” Hogarth of Sheridan, WY passed on August 19, 2018, at her home. Born April 27, 1941, in Burlington, CO where she married and had two children and moved to Las Animas, COand began working for the Veterans Hospital as a nurses aide until she moved to Gillette, WY where she worked at the Veterans Hospital there.She met and married Robert Hogarth there and they traveled for many years finally settling in Sheridan, WY where she and her husband would share the remainder of their lives together.Jean loved to crochet, draw and sew and gifted or donated many of her projects. Jean is survived by her son Robert Williams and his wife Debbie and her brother William “Bill” McNeill and his wife Teresaand grand children and nieces and nephews and so many friends. There will be a Celebration of Life gathering at Heritage Towers on Wednesday, August 29, 2018, at 12:30 pm in the dining room.Kane Funeral Home has been entrusted with arrangements.