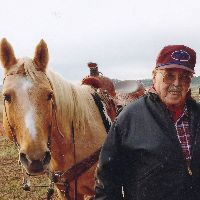 View Service Folder | Click for Video Tribute Harry Mefford, Jr., 94, of Sheridan, passed away on May 2, 2015, at the Sheridan Memorial Hospital.Harry was born on October 28, 1920, to Harry M. and Catherine (O\'Connell) Mefford in Sheridan. He attended Lodge Grass High School, graduating with Honors in May of 1940. Harry joined the Marine Corps in August of 1940. He was stationed at Kaneohe Bay in Oahu during the attack of Pearl Harbor. He was 1 of 8 of an elite group of men of the Marine Horse Guards. His continued Military Tour was to the Islands of Sipan, Tinian, and Midway as a Sargent running supplies with the 2nd Marine Amphibian Truck Co. Harry\'s unit was one of the first unit to occupy the city of Nagaski after the bombing. He finished out his military career in South Carolina.Harry married Dorothy Shreeve on March 13, 1946. He worked for the Padlock Ranch and the T Bar T Ranch along with numerous other ranches before he became a heavy equipment operator on the building of many Interstate Systems in Wyoming before moving on to Decker Coal where he worked for 40 years until his retirement. He married Gayle Perkins in 1987, at the Miles City Bucking Horse Sale.Harry loved his family, especially the children. He will always be remembered as a huggable grandfather figure and a cowboy legend. He always loved to have a good argument with his wife and kids. Harry was a member of the Sheridan Elks BPOE.Harry was preceded in death by his parents Harry and Catherine, his first wife Dorothy Benedict and sister Jane Lix. He is survived by his wife Gayle of Sheridan, sons, Gary (Sara) Mefford of Sheridan, WY, Dick (Vivian) Mefford of Dalhart, TX, and Tom(Cheryl) Mefford of Hardin, MT, two granddaughters, Ashley Inguargiato of Ewa Beach, HI, Londyn Mefford of Sheridan, WY, step children, Michael (Noreen) Woodall, Doug (Catalina) Woodall, Melanie (Brian) Cleys, Susan (Jerry) Dobrenz, Sandy (Marty) Perkins, Cinder (Ron) Destafano, Shannon Dahl, numerous step grand children, and great grand children.A Celebration of Life will be held at 2:00 p.m. on Friday, May 8, 2015, at Kane Funeral Home with Reverend Kevin Jones officiating. Inurnment will be in the Elks Cemetery with Military Honors. A reception will follow at the Elks Lodge.In lieu of flowers donations can be made to the Elks Youth Rodeo at 45 W. Brundage, Sheridan, WY 82801.Kane Funeral Home has been entrusted with arrangements.