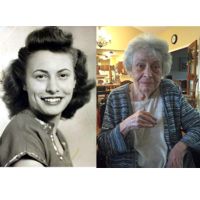 Jean A. Kinnison, 87, of Sheridan, passed away on Thursday, March 24, 2016, at the Watt Cottage at Green House Living.Jean Kinnison was born March 18, 1929, in Cheyenne, WY, as Bernice Jean Johnson. She was adopted from the WY Children’s Society that May by Sequin and Sarah Stiffler and joined her new family in Clearmont, WY. Her name was then changed to Jean Anne Stiffler. Her brother C.R. was 14 and her sister Ruth was 11 at the time of her adoption.She moved to Buffalo the middle of her Junior year and graduated from Buffalo High School. One Saturday night at a country dance in Clearmont, she met Laurel. They danced together most of the night. Laurel taught Jean the California Swing and in later years they won several Jitterbug contests together.They were married May 10, 1947 in Red Lodge, MT. They moved to Red Oak, IA and worked together owning the Dixie Cream Donut shop. After a few years they returned to Buffalo and worked together at Alabam’s store selling groceries, souvenirs, tires and gasoline. They managed the store for about four years.In 1954, Laurel and Jean purchased the Trails End Motel in Sheridan, which they owned for nearly 40 years and worked in together. Over the years, they turned the Trails End Motel from 12 log cabins into a motel with 83 rooms, restaurant, lounge and the first indoor swimming pool in Sheridan. They lived right at the Motel for 21 years until Laurel built them a new home “away from work”, which they moved into in 1976. After selling the business in 1994, they enjoyed traveling together in their motor home and enjoyed time with friends and family. They lived in their new home for 35 years. In the spring of 2012, Laurel and Jean moved to the Watt Cottage at Green House Living. Laurel passed away June 2013 just a few weeks after their 67th Wedding Anniversary.Jean loved music, to dance, read, play bridge, attend concerts and theater performances and spend time with her friends, her children and grandchildren. In her retirement she took art classes at Sheridan College and enjoyed learning to paint. While at the Watt Cottage she looked forward to participating in a variety of activities with her Green House family. She was a member of Chapter B of P.E.O, Past Worthy Matron of Order of Eastern Star, Social Order of Beauceant, and Past Queen of the Daughters of the Nile.Jean is survived by her children Tom Kinnison (wife Sharon), Allan Kinnison (wife Barbee), Tami Davis (husband Richard), grandchildren Brian Kinnison (wife Shelley), Janelle Coon (husband Justin), Chelsey Roberts (husband Lynn), Jesse Kinnison (wife Lynne), A.O. Kinnison, Justin Stroup, Colin Stroup and Caitlin Stroup, great-grandchildren Cloie, Sammie, Marissa, Alexander, Dylan, Lauren and Noah.Memorials in Jean’s memory may benefit the “Activity Fund” at Green House Living for Sheridan, 2311 Shirley Cove, Sheridan, WY, 82801A Memorial Service in Jean’s memory will be held Monday, April 25, 2016 at 10am at Kane Funeral Home in Sheridan,with Pastor Tony Forman officiating. Inurnment will be held in the ELKS section of the Sheridan Municipal Cemetery with a reception to follow at the Kane Reception Hall.Kane Funeral Home has been entrusted with arrangements.