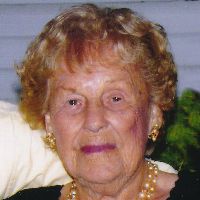 Margaret Grace Martens passed away on the evening of October 28, 2015 at the age of 98. She leaves behind four grandchildren, sixteen great grandchildren, and her beloved poodle, Penny. Ms. Martens was known as “Grandma” to these remaining family members, and to the numerous friends and neighbors she encountered over the course of her long, rich life. Indeed, all who met Ms. Martens instantly recognized in her the wisdom that comes with age, with a full life seasoned with its share of triumphs and trials. Her resilience, her courage, and her ability to find humor in all of life’s up and downs touched everyone who was blessed with her presence. Family and friends saw in her a maternal sagacity that only grandmas can possess.Ms. Martens was born on October 20, 1917, on the banks of the Platte River in South Dakota. The youngest of nine children and the daughter of a sharecropper, Ms. Martens grew up outside, tending to plants and animals. Up into her old age, a thick band of muscle curved along her arms, the sign of a youth spent caring for horses, hauling hay, and trekking in the South Dakota snows. Her physical strength was matched by her strength of sprit. Nothing short of “tough as nails” would suffice to describe a woman who weathered South Dakota winters, the Great Depression, and a world war. Ms. Martens often took her courage and wit on the road, moving numerous times as a child and an adult. Her migrations landed her in California, Arkansas, Kentucky, Illinois, and Wyoming, to name a few. She built a life on the move, but always made a home among her family. On June 6, 1939, she married her favorite dancing partner, Henry Martens, and they remained together for 47 years, until his death in 1986. Her two children, Mary and Henry Jr., preceded her in death.A life celebration of Ms. Martens will be held on Saturday, November 7, at 11 am Kane’s Funeral Home. Please send all donations in her name to the scholarship fund at St. Joseph’s Indian School in Chamberlain, South Dakota, where she was a lifelong donor.Kane Funeral Home has been entrusted with arrangements.