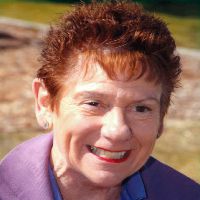 Sharon (Shari) Verley passed away suddenly at her home April 30, 2016. She was born December 18, 1938 in Ogallala, Nebraska to Dale and Dorothy (Ball ) Jenkins. She grew up with the hard work ethic of her parents who traveled to California, Idaho then Wyoming during and after WWII. She talked of walking the ditch banks to pick asparagus for creamed asparagus on toast, gathering up potatoes left in the fields and selling the sugar beets that fell off the trucks. She was a top speller in school and always made sure her kids practiced their spelling!She was married to James (Jim) Verley for 44 years until his death in 2007. She was a \"Kiewit wife\" and made many friends as the jobs took them around the state building the highways.When Jim retired they enjoyed the reservoir and lake with the motor home and boat. She made the paddle fishing trips and sat out in the snow ice fishing. Pretty dedicated for someone who was afraid of water and didn\'t wear socks.Jim was the gardener, but Mom was the canner sauerkraut, tomatoes, pickles and jelly galore. Jim and Shari had many Shrine friends to take in the cutter races and enjoy the gambling trips.Weekends were spent cheering on the Wyoming Cowboys and her Denver Broncos. Weekdays you might find her golfing, bowling or line dancing but you didn\'t interrupt her 10-11 story time. She bridged the generations with her Facebook prowess. Grandkids (aka olive snitchers) were for spoiling with the best candy cupboard and trips to the dollar store.Sharon raised five children; Jo Forbes (Spike), Duane Verley, Becky Rhodes (Scott), Paul Verley(Kristy) and Michael Verley (Annie). And her loving grandkids; Jeremy (Ruby) & Geoffrey, Taylor, Montanna & Jaxon, Jessi, Jamie, Karissa, Eric, Tyler & Sierra and Ashtyn. Her brother Don Jenkins (Linda) and his family also survive her, along with 6 great grandchildren, nieces, and nephews.Sauerkraut dinners will never be the same, but we know she\'ll be whistling us home with her big generous heart.There will be a reception at 2:30 pm Thursday, May 5, 2016 at Kane Funeral reception hall. In lieu of flowers donations may be made to the Sheridan Dog & Cat Shelter at 84 East Ridge Road, Sheridan, WY, 82801 or the Kalif Shriner\'s Children\'s Hospital Fund at PO Box K, Sheridan, WY, 82801.Kane Funeral Home has been entrusted with arrangements.